The Blue-tongued Lizard is a large skink (about 30cm) commonly found around Melton. It is one of our commonest and best known lizards. They are distinctly coloured with about six dark bands on a pale background.  The tail is also relatively short in relation to its body. When disturbed they flatten their body to make it appear larger then open their mouths to display their distinctive blue tongues. Although many people fear them and mistake them for snakes they are completely harmless. They are often found in grasslands, especially native grasslands, as well as beside creeks. They also have the unfortunate habit of sunning themselves on bitumen roads, with unfortunate consequences. Dead Bluetongues are a common feature on our roads in late spring or early summer. They are fond of fruit and berries. They are also found of snails. Blue-tongued Lizards do not lay eggs but bear living young. 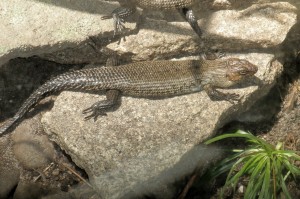 Cunninghams Skinks are large lizards (about 30cm) with spiny tails. They are common along Melton creeks in rocky crevices. These large skinks have a uniformly dark grey colour to match the basalt rocks in which they live. Cunninghams Skinks living in Central Victoria are more; lightly coloured, with a pattern that matches the granite rocks here. They are a common sight along the rocky escarpments overlooking Toolern Creek, lower Arnolds Creek and Melton Reservoir. They are sometimes seen in grassland fringes adjacent to rocky escarpment.  When disturbed they quickly run into rocky clefts where they wedge themselves tightly within. Unlike Blue-tongued Lizards, they are fast runners.  They are fond of berries and fruits, especially boxthorn berries. Like Blue-tongued Lizards they do not lay eggs but bear living young. 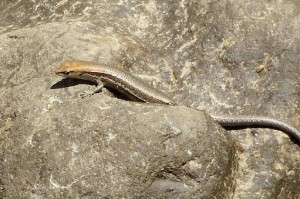 The Garden Skink is a very common lizard, found both in bushland, beside creeks and in suburban gardens. As it eats small insects its food requirements are modest, allowing it to thrive in gardens. They are often seen on warm sunny days during the colder months. Possibly their small size allows them to warm up quickly in the sun, allowing them to be active in cooler months. Their small eggs are sometimes found in leaf litter. Tiny newly-hatched skinks, barely a couple of centimetres long, are commonly seen in late summer.

Garden Skinks lose their tails when attacked, leaving the wriggling tail to attract the predator while the now tail-less lizard makes its escape. A new tail is regrown. However the new tail is a uniform grey colour, much shorter than the original. 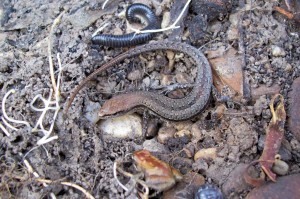 Striped Skinks are about 16 cm and are commonly seen around Melton in grassland adjacent to rocky outcrops along the creeks or on volcanic outcrops. They are extremely fast runners and swiftly vanish among rocks when disturbed in the grass. They have very distinctively marked longitudinally lines along their bodies, hence their name.

Like the Garden Skink, these skinks lose their tails when attacked, leaving the wriggling tail to attract the predator. Again, a new tail is regrown, which is a grey colour, and shorter than the original. 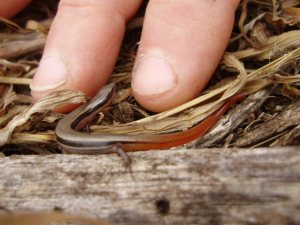 Bougainville’s Skinks are seen among boulders beside creeks. They burrow into the soft soil when disturbed, in an almost snake-like wriggling manner. This lizard has a distinctive rose-coloured tail.

The Tussock Skink is a small striped skink found in grasslands and rocks.

Geckoes are nocturnal lizards seen at night in gardens and even in houses!

They are conspicuous by their soft velvety skin and their large golden-coloured eyes. They are frequently seen in gardens, fences and around houses in Melton and Bacchus Marsh, as well as in Melbourne suburbs. According to one fencing contractor, they are often found when suburban boundary fences are demolished prior to replacement.  Geckoes lose their tails when attacked, leaving the wriggling tail to attract the predator while the now tail-less gecko makes its escape. A new tail is regrown. However this is a plain colour, without the distinctive markings of the original tail.

They can sometimes be seen clinging to the outside of windows, visible as ghostly silhouettes against the darkness. They can be observed hunting and eating moths that have been attracted to the window by the inside light. Geckoes have relatively wide heads, including a correspondingly wide moth. This enables them to eat larger bodied insects such as moths. 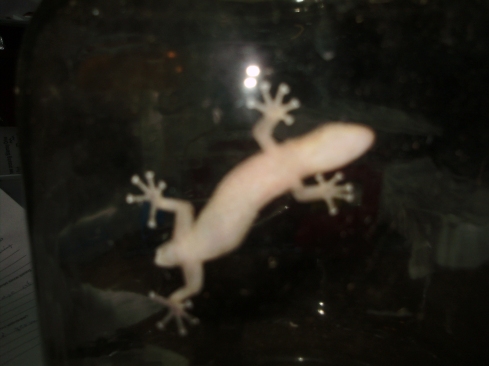 One gecko repeatedly returned to a spot on an outside wall, directly behind an internal gas heater. Presumably the temperature on the outside wall was warmer than sites further away from the heater. Clear indication of heat loss through the wall, but of benefit to wildlife in this case. 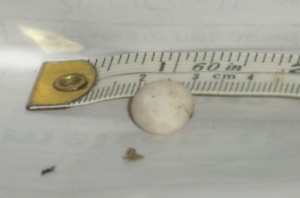 Gecko eggs are occasionally seen around the garden. This one was found in a stack of bricks. Unlike other lizard eggs, that are leathery in texture, gecko eggs are like tiny bird’s eggs, with similar brittle shells. Tiny geckoes are occasionally seen in the garden, a couple of centimetres in length. These are much darker in colour than the adults. 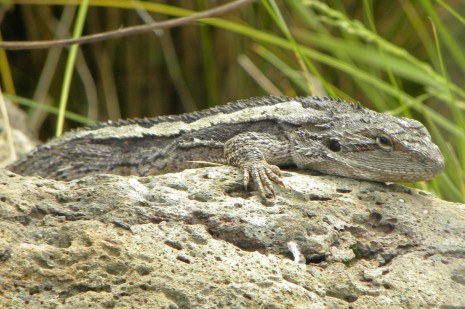 The Jacky Lizard (also known as Tree Dragon) looks like a miniature version of the larger & better known Bearded Dragon. They grow to about 30 cm in length. Jacky Lizards are seen locally at Eynesbury.

They are often seen during bird watching walks. Jacky Lizards are said to be also found in the hills north of Melton & Bacchus Marsh, ie. Toolern Vale, Pyrete Forest, Lerderderg Gorge etc.  Also possible sightings at Kororoit Creek at Deer Park.  Expert advice states they occur along the coastal area, You Yangs, Mt Rothwell, Point Cook Metro Park & Brisbane Ranges; also ‘reasonably common in woodlands around the grasslands’. They are fond of sunning themselves on rocks or logs. 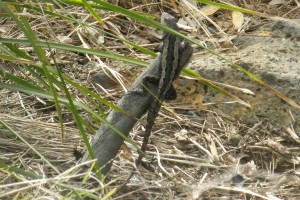 This juvenile Jacky Lizard about 12cm long was seen sunning itself on a rock beside a path.

Mountain Dragon are found in dry bushland around Toolern Vale, as well as in the Lerderderg Gorge. They are similar in appearance to the Jacky Lizard.

A few goannas have even been seen in Melton but these are probably escapees. 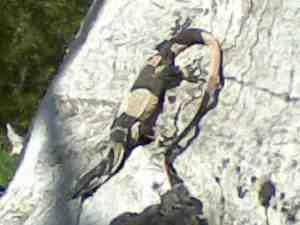 This large Bearded Dragon (Pogona barbata) was recently found in farmland adjacent to Pinkerton Forest. About 40 cm in length it was sunning itself on a gravel track, before running off into a Melicytus bush growing over a rabbit warren, beside the track. Their smaller relatives are found locally; Jacky Lizards in Eynesbury & Mountain Dragons in the Pyrete Forest. The Bearded Dragon is larger & more robust than the smaller local dragons, with more pronounced head spines (& expandable beard). These fearsome looking lizards are both inoffensive & harmless!

This would appear to be outside their usual range as according to DEPI ‘Bearded Dragons are generally found in the warmer parts of Victoria, north of Melbourne’. ‘The preferred habitat of Bearded Dragons are trees in woodlands and dry sclerophyll (Eucalyptus) forests where they can observe their territory, catch prey, bask in the sun and sleep.’ ‘http://www.depi.vic.gov.au/__data/assets/pdf_file/0010/205858/Bearded_Dragon.pdf;

Perhaps this may be an escapee? Nora Peters also photographed one a year or so ago between Melton & Toolern Vale, so perhaps their range may extend further south than maps allow.